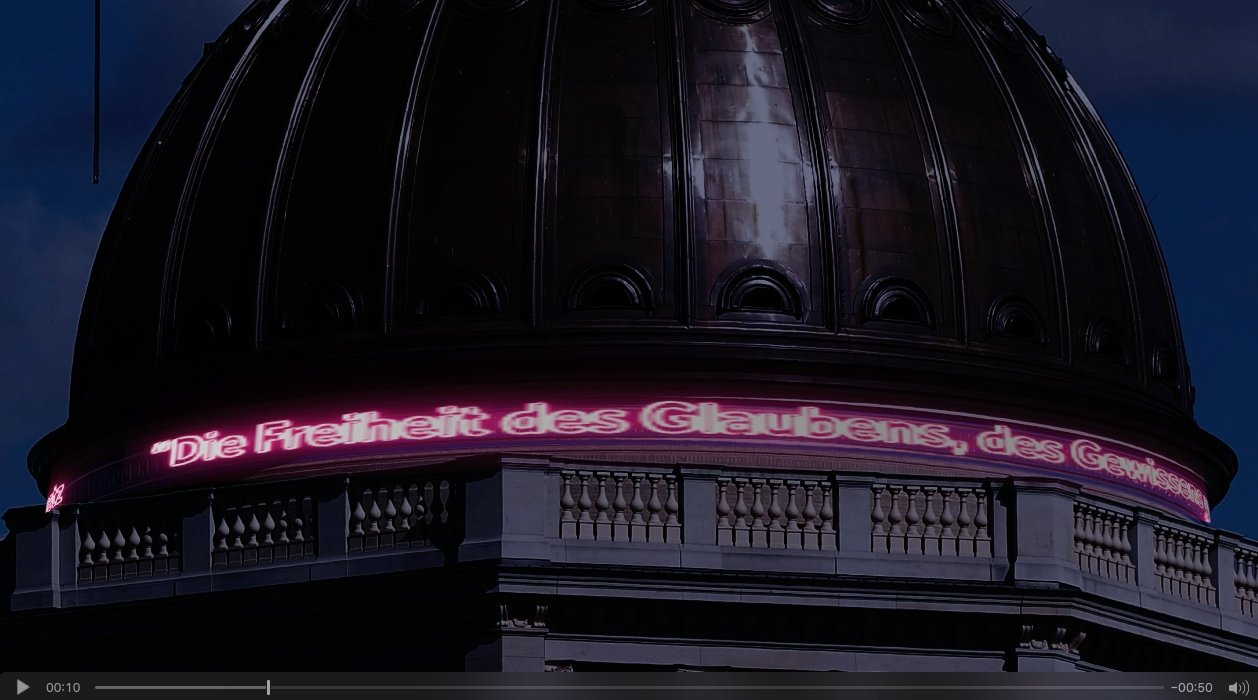 We perceive Berlin as tolerant and open to the world. The banner at the foot of the new dome of the Berlin Palace irritates us. There is says (again):

Above this, there is now a golden cross. For further background information, here is a link to the Humboldt Forum website on this topic including a discussion forum: https://www.humboldtforum.org/en/magazin/dossier/the-cross-on-top-of-the-humboldt-forum/. Even rather conservative voices such as the Catholic Church (in German: https://www.katholisch.de/artikel/25630-kreuz-und-bibelspruch-das-berliner-stadtschloss-erhitzt-die-gemueter) and the German newspaper FAZ (in German: https://m.faz.net/aktuell/feuilleton/debatten/das-kuppelkreuz-auf-dem-humboldt-forum-glaenzt-mit-falscher-symbolk-16790336.html) see this as problematic. An English article by Artnet criticizes these conservative symbols  – from our point of view rightly so –  also  in the context of the current discussions on colonialism and white  supremacy: https://news.artnet.com/opinion/humboldt-forum-cross-issue-1884378.

We think: Berlin (and Germany) can do better than that! But since the banner is already there, we want to counter this with a lasting positive contemporary statement, and as soon as possible. A statement as a counterpoint or clarification that fits to today's Germany, to Berlin, to our society as well as to the history of the  place. A statement which invites to dialogue and above all: which is as visible to everyone as the banner itself. Temporary exhibitions or installations inside the Humboldt Forum do not seem to be sufficient to us. Adding other religious symbols – as has already been discussed – also does not seem to be appropriate. First of all, there are many religions, and it will not be possible to do justice to all of them. And secondly, the issue of religion is just one of the many different aspects that play a role in this place, this building, the Humboldt Forum and for all of us.

Our initiative provides for an LED ticker above the banner. Under Animationen you can see how this should look like. The small LEDs are mounted on a transparent mesh so that the banner underneath is still visible. At nightfall, the LEDs turn on and form a ticker. The banner then visually disappears behind the ticker. The typographical design (font and colour) is deliberately modern to contrast with the original.

At the start of the project, the LED installation shows excerpts from the German constitution (the “Basic Law”) and the Universal Declaration of Human Rights of the United Nations in various languages. At the same time, together with the Humboldt Forum, we want to use various channels to call for participation in the project and to propose further texts. After selection by a curating commission, these texts will also be displayed on the lighthouse and, in the Humboldtian sense, generate an interlinked, multi-voiced discussion.

The texts chosen for the start of the project underline the tolerance and openness to the world on the basis of the values generally recognized by us today in Germany and Berlin (and many other parts of the world), as set out in the Basic Law and the Declaration of Human Rights.

The chosen texts underline our tolerance and openness to the world on the basis of the values generally recognized by us today in Germany and Berlin (and many other parts of the world), as set out in the Basic Law and the Declaration of Human Rights.

The chosen texts are also a response to the history of the site. After all, it was precisely here where the people and the rulers fought over the last centuries for freedom and democratic rights: From the "Berliner Unwille" of 1448, the March Revolution of 1848, the November Revolution of 1918, the 40th anniversary of the GDR in 1989 to the first democratic elections and the decision to join the Federal Republic of Germany in 1990. Today we are glad to live in a system that guarantees democracy and fundamental rights for all its citizens.

With reference to the history of the site, to the banner and to the use of the building by the Humboldt Forum, the selection of texts focuses on human dignity, the free development of the personality, the principle of equality, freedom of belief, conscience and religion, freedom of expression and freedom of art and science.

The banner and the cross on the top of the dome are thus placed in a positive current context that is visible to everyone. Passers-by and other viewers are invited to reflect. At the same time, the ticker texts remind all of us (Berliners, visitors and also the Humboldt Forum itself) of how important these values are for us and our society. A lighthouse for a Berlin that continues to be tolerant and open to the world.

We see this initiative as a civic engagement and art project (permanent installation). We launched our initiative in June 2020 and presented it to the Minister of State for Culture Monika Grütters, the Berlin Senator for Culture Klaus Lederer and the Humboldt Forum. We are currently in further discussions with the Humboldt Forum. We would be very pleased if this initiative could be implemented in the short term. The current banner should not remain uncommented.

We are looking forward to any support. You can leave your comments at the Humboldt Forum (German version only, click on "Diskutieren Sie mit" : https://www.humboldtforum.org/de/magazin/dossier/kreuz-kuppel/) and on YouTube. On YouTube you can also like and subscribe to our videos.
We are not on Facebook/Instagram/etc.

Frederick II, Elector of Brandenburg (German: Kurfürst Friedrich II) built a palace right here in the middle of the 15th century in what was then Berlin-Cölln. The citizens, who until then had been autonomous, resisted this ("Berliner Unwille") and even flooded the building pit in the spring of 1448. In the end, however, the Hohenzollerns prevailed, the castle was built, the citizens lost their autonomy and their urban freedoms were restricted.

1848 it was again precisely here that the people demanded democratic rights in a peaceful demonstration as early as 1848. King Frederick William IV (German: Friedrich Wilhelm IV) had the square cleared. This triggered a spontaneous barricade uprising, the beginning of the March Revolution of 1848. Frederick William IV was not a fan of democratic rights or a constitution. He only temporarily granted the people a few rights to calm them down and abolished them shorty afterwards. Instead, he insisted on the divine right of kings and, to underline this, revealed the (now re-attached) inscription and the cross.

The November Revolution of 1918 was also an uprising against the traditional balance of power. It led to the end of the monarchy in the German Reich on 9 November 1918. On this day Karl Liebknecht proclaimed the socialist republic in the Berlin Lustgarten and a few hours later again right here in the Berlin City Palace. Philipp Scheidemann had got wind of this and at the same time proclaimed the parliamentary republic from the Reichstag building. The former Emperor Wilhelm II fled from occupied Belgium into exile in the Netherlands.

At the end of World War II, the building burned down for the most part during an Allied air raid. The GDR dictatorship had the ruins blown up and built the Palace of the Republic. The parliament of the GDR ("People's Chamber") met exactly here. In the GDR, a democratic system and fundamental rights officially existed, but in fact these were not enforceable and were systematically disregarded.

On 7 October 1989 the 40th anniversary of the GDR was celebrated right here, in the Palace of the Republic. Honecker, Gorbatschow, Ceausescu, Arafat and many other guests patted each other on the back and celebrated the republic. At the same time, thousands of demonstrators formed a protest march outside from Alexanderplatz to the Palace of the Republic, which was shielded by police forces. The crowd shouted "Gorbi, help us", "No violence" and "Democracy - now or never". Later in October 1989, Honecker had to resign. On 9 November the Wall fell. In March 1990, the first democratic and, at the same time, the last election to the GDR parliament took place. On 23 August 1990, the GDR parliament decided exactly here to join the Federal Republic of Germany with effect from 3 October 1990. 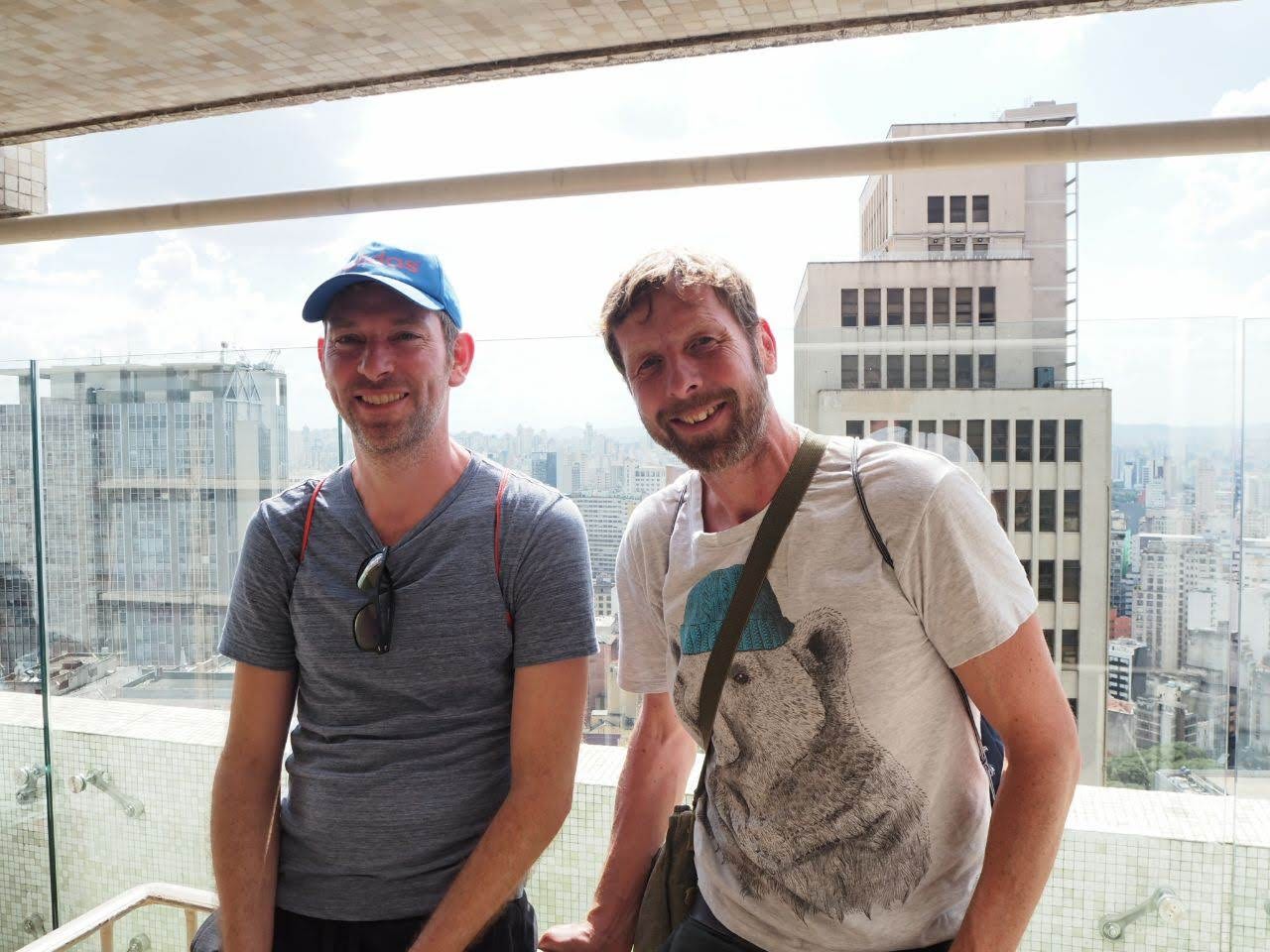 Your submission has been received!

Oops! Something went wrong while submitting the form :(